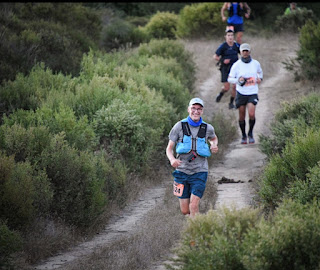 It was my first 50 miler and I was in the restroom when the race started. I was one minute behind the pack and because of the distance, I was okay with it. I was feeling strong, I ran at a steady pace (no walking) while it was cooler, after clearing the initial single-track congestion.

After the aid station at the halfway point (out and back), my glutes and legs were feeling heavy, so I started walking and running from that point on. At mile 36, my self-talk was about keeping my feet moving and finishing my first 50 miler. Mentally I was in a good place because I was confident that if I kept my legs moving, I would be able to finish.

After 40 miles the toughest sections of the course were the downhills. My right leg below the quad felt weaker than my left, so I paid close attention to my stride mechanics from that point on. It got hot from mile 30. I was using evaporative cooling techniques at each aid station by pouring ice in my mission neck gaiter, which has elastic on both ends so the ice did not fall out. I also would grab ice out of the gator after I left the aid station for my bottles. I took s-caps and salt stick fastchews hour until I ran out with about 5 miles. I used one bottle of water the whole way. I used the black cup they gave us, for the first 20 miles (until I left it at an aid station in error) for coke. In the beginning, I was filling my second bottle with scratch. All my aid station stops were short because I didn’t want my muscles to tighten. I was grabbing cut-up cliff bars, donut holes (favorite), watermelon, bananas, and cantaloupe. I shoved food in my pockets and kept moving. I also ended up eating 3 gu’s (aid stations), and 3 cliff bar shot tubes (my pack).

After mile 20 one bottle I used for coke, and the other for water. Except for the second to last aid station, I filled my second bottle with scratch electrolyte, because there were no s-caps available in my pack or at the aid station.

The last five miles were tough, because my walk/run stride was more like a hobble. The last 2 ½ miles were most difficult because it turned dark and it was a technical single track, mostly downhill. The uphills were by far the easiest, so I was looking forward to the ups until the end.

Finally, the finish line was visible. I finished alone and immediately was grateful I was able to accomplish this goal. Special thanks to my friend and training partner Anthony Olivero. Anthony ran the marathon and was at the finish to greet me and help me recover.

Anthony and I had previously discussed that this was a business trip, and we both took care of business! We were happy and excited about our next race adventure.

Popular posts from this blog

One of the least discussed benefits of mountain trail running is proprioception.

- August 27, 2021
Proprioception is a noun (Physiology): perception governed by proprioceptors, as awareness of the position on one's body. I started researching proprioception, after reading an article regarding the physiological benefits gained by the activity of mountain trail running. I've have an active daily running streak, that started on October 6th, 2007. Running every day has allowed me the opportunity to invest a lot of time and energy into perfecting my stride mechanics. My running style is unique to me. However, because I run everyday it has been important to repeat movements that allow me to run injury free. What's interesting about mountain trail running is that I have taken more falls in the last year, then at any other time during by almost 14 years running streak. What is interesting is I have learned to fall without serious injury by constantly focusing on the best possible foot placement. Plus in trail running there is normally a grade involved, and I'm running on dir
Read more

- February 10, 2015
I've discussed the concept of the advance quote discount in previous posts. I wanted to take the opportunity to cover this concept exclusively. Bottom line: if you don't allow 8 to 10 days before you NEED insurance you are paying too much! What's unique about the advance quote discount (sold by most most independent insurance companies) is that the discount continues on renewal in most cases. So if you receive a 5 percent discount for the first six months the discount will also follow you on future renewals as long as you stay with this carrier (without a lapse in coverage). In addition, many insurance companies tier certain risk exposures. Tiered insurance policies: most insurance companies tier their policies initially to be more competitive for the markets (risk exposures) they are attempting to attract. Many times insurance companies not only give an upfront discount but in many cases they'll give the consumer a better tier rating. Especially if the insurance
Read more